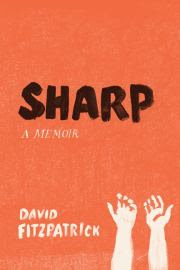 Sharp: A Memoir. William Morrow & Co, 2012. Print.
We lost 4 members of the Guilford High School Class of 84: David Ciardello, Richard Eaton, Ronnie Burns, and Lars Schulze. We almost lost David Fitzpatrick. David Fitzpatrick was our most beloved classmate. He was popular, but always nice to kids on the outskirts like me. Although he was a class clown, he always respected his teachers and often made them laugh along. He was voted best personality and best smile. He was our golden boy, and he made school a lot more fun.

I remember looking around for David at one of our high school reunions, and learned that he had had a nervous breakdown and was living in a group home in a bad neighborhood in New Haven. It was whispered that he had gained a couple of hundred pounds and was zonked out on anti-psychotic drugs. It was one of the heartbreaking stories I had ever heard. No one thought any less of David, we were just sad and we missed him dearly.

Nearly 20 years later, David has emerged from the hell of mental illness. And he isn't just surviving--he is triumphing. At the age of 40, after nearly 2 decades of institutional living, he went back to college and earned his MFA (Master of Fine Arts) in creative writing from Fairfield University. He married a beautiful, intelligent woman who is a professional writer and graphic designer.

Not only is David living a healthy and productive life, he has accomplished every writer's dream--he has completed a riveting memoir which is being published by HarperCollins, and hits the shelves on August 21st.

Our prayers have been answered. Fitzy is back.

And he's getting rave reviews:


"He writes with a personal urgency initially tapped by author Wally Lamb, who encouraged him to commit his experiences to paper. Fitzpatrick slam-dunks readers into the grim, murky bowels of his psychotic ordeal, yet provides a promising coda for himself and those jonesing for a 'normal' life." --Kirkus

"In this mesmeric, dire memoir of his agonizing journey through hell and back, Fitzpatrick takes extraordinary care in re-creating the cerebral maelstrom that brought on the first breakdown at age 23." --Publisher's Weekly.

"Harrowing. Fitzpatrick's own story pales in comparison to those of some of his fellow patients. Readers will be haunted by these accounts but gratified by the author's hard-fought battle with the demons that drove him to carve into his own skin." --Library Journal

This month's Connecticut Magazine has a great article about David's writing and his friendship with author Wally Lamb and book agent Richard Abate. HarperCollins was hesitant at first about publishing the memoir due its dark subject matter. Wally Lamb helped convince the editors that David Fitzpatrick's work is as noteworthy as William Styron's classic Darkness Visible: A Memoir of Madness, and that it's a story that needs to be told. Like Styron's book, Sharp offers a beautifully written, insider's view of surviving the terror of mental illness.

Sharp is one of the best memoirs I've ever read. It ranks right up there with Dry by Augusten Burroughs, Breakdowns by Art Spiegelman, and Girl, Interrupted by Susanna Kaysen.
Posted by Rebecca Hickman at 4:41 PM

Please note that the views expressed here do not represent the official position of any library.